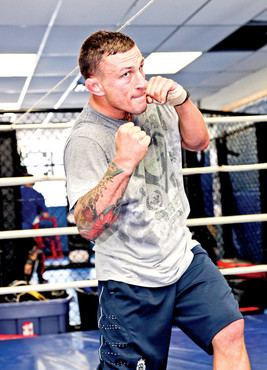 Gillespie excels in Ring of Combat

Bellmore resident Lou Neglia once made a name for himself inside the ring as a three-time world kickboxing champion, but it’s his tireless work outside of it these days that truly turns heads in the fight game.

Neglia’s Ring of Combat promotion—which will have its 52nd show hosted by the Tropicana Casino and Resort in Atlantic City, NJ, on Sept. 25—has elevated the careers of fighters from across the world as they strive to make the leap to the Ultimate Fighting Championship (UFC) and other shows. In fact to date, 92 Ring of Combat fighters have been signed to the UFC, including current middleweight champion Chris Weidman, a Baldwin High School alumni, and Wantagh’s Al Iaquinta, who’s currently climbing up the lightweight rankings.

“The main focus has always, always been showcasing new talent,” Neglia said. “The vision was to do a show that was competitive. The Ring of Combat makes tough fights and tough fights make great fighters.”

Among the fighters currently making waves under the Ring of Combat banner is one of its newest champions, Wantagh’s Gregor Gillespie. A perfect 5-0 as a professional, Gillespie carries around the Ring of Combat’s lightweight title after defeating George Sheppard via first-round submission (arm-triangle choke) in 3:45 on June 5.

“I don’t want to go a full fight,” Gillespie explained. “I want to finish fights. I thought the last two fights went too long. The longer you’re out there, there’s more of a chance to get hurt or for the other guy to catch you.”

The starts have been fast and the finishes furious for all of Gillespie’s opponents, as all five fights have ended in the first round and none have lasted longer than his title victory. His quick finishes have come from not only submissions (three) but also from a punishing ground-and-pound attack set up by a wrestling game that easily ranks among the best in all of mixed martial arts. “If you’re one of the best wrestlers, or even a better wrestler [than your opponent] you can dictate where the fight is,” Gillespie said.

A two-time New York State wrestling champion in high school, Gillespie was even better at Edinboro University, racking up All-American honors four times, including a Division I national championship in 2007 to go along with a 152-13 career record.

“Gregor for the most part uses wrestling to get his takedowns,” his striking trainer, Keith Trimble of the Bellmore Kickboxing Academy, said. “From there, Gregor on top of anyone is a nightmare.”

“He’s smart enough to know not to rely only on his main fighting ability, wrestling,” Neglia said, noting how the sport continues to evolve.

For Gillespie, the evolution from wrestler to mixed martial artist includes continuous training not only on his strength, but the disciplines of jiu-jitsu and striking, must-have elements of any fighter today. “Jiu-jitsu was an easy transition,” Gillespie said. “I am confident on my back. Striking has been the most difficult to pick up and not as easy a transition because it’s not the same movement.”

But make no mistake, just because Gillespie continues to develop in those areas, he isn’t afraid to use them once the cage door closes. “The fight starts on your feet,” Trimble said. “And striking opens your wrestling game up. [With Gregor’s striking] you never know where he’s coming from.”

Trimble’s Bellmore Kickboxing Academy, which has been around for 18 years, is hardly utilized solely by fighters in the midst of training, but the list of those under his tutelage is certainly impressive. Former Freeport High School standout Andre Harrison, who once went 7-0 in the Ring of Combat and held the featherweight title, captured the Titan FC’s 145-pound belt on July 18 and is a training partner of Gillespie. Trimble’s tight knit training group also includes current UFC fighters—and former Ring of Combat fighters—Gian Villante and Ryan LaFlare.

“Lou [Neglia] always puts on great shows and competitive shows,” Trimble said. “You’re not going to see a fighter that’s 6-0 or 7-0 fighting someone that’s 1-9. He puts on quality, competitive fights. In the Ring of Combat, the proof is in the pudding. That’s why they’re sending so many guys to the UFC, Bellator and other shows.”