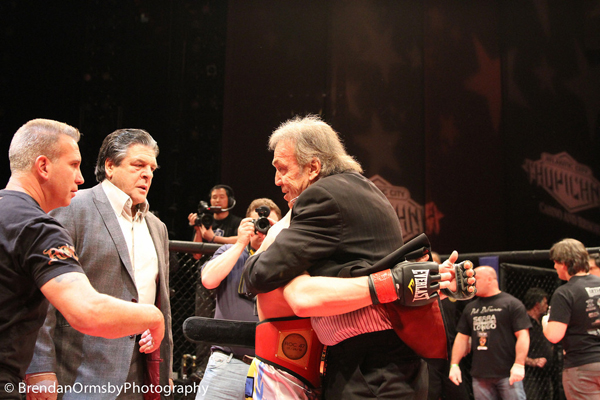 While Bellator holds the #2 spot in MMA, and WSoF is surging, history indicates that – so far – the only way to make a small fortune competing with the UFC is to start with a large one. So far, every company that ever went head to head with the UFC gets bought or gets bankrupt.
WFA – bought
Pride – bought
WEC – bought
ProElite XC – bankrupt
IFL – bankrupt
Affliction – bankrupt
Strikeforce – bought

On the other hand, there are some remarkably successful shows that don't aspire to the potential fabulous riches of PPV, and instead seek to give regional fans everything they want, and send their best up fighters up to the UFC on the regular basis.

At the head of that class is Lou Negia's Ring of Combat, which is the American Idol for future MMA stars. Ring of Combat 47 sold out the Tropicana Casino last Friday

“I am always proud for the support we get receive from the fight fans and the community, said Lou Neglia, Ring of Combat president.  “A lot of hard work goes into each and every Ring of Combat show and when you receive that kind of support from the fans, you just can’t say 'thank you' enough."

Ring of Combat continues to stand behind its successful formula of keeping it simple and giving the fight fans what they pay to see….great, evenly matched, fights from tomorrow's superstars.

This formula was again in play for ROC 47 as five fighters have earned the right to wear ROC gold in competitive and entertaining matchups.  All titles were vacated by ROC alumni who now compete in the UFC such as current UFC Middleweight champion Chris Weidman and undefeated prospect, Ryan LaFlare to name only a couple.

Lou Neglia feels this group of newly crowned champions will also go on to compete in the UFC just like their predecessors.  “This group of new Ring of Combat champions is a very talented group of fighters,” affirms Lou.  “I have no doubt that they will be getting the call to compete in the UFC and just to make it to the big stage  alone makes the ROC team and myself very proud."

At ROC 47, Lou Neglia was joined by good friends and also former Ring of Combat alumni Chris Weidman, Frankie Edgar, and Matt Serra.  All three are regular attendees at Ring of Combat events as they always support the fighters and the organization where they came from.