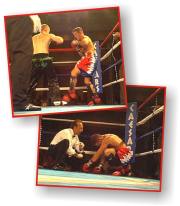 The USKBA Full Contact Kickboxing Super Lightweight World Championship Title was on the line with Champion TIM “Bring The Pain” LANE defending his title against ERIK "The Hurricane" MARSHALL. Lane truly lived up to his nickname. This fight was action packed from start to finish! Round One opened with a very short feeling out process as these two fighters exchanged kicks and punches. By the middle of the round, Marshall was landing more punches and kicks. Shortly after, Lane turned up the heat and landed some solid shots staggering Marshall. In Round Two, Marshall was ready to wage war. The two exchanged punches, but it was Lane that controlled the ring landing relentless body shots. Round Three was more of the same, these two warriors exchanged strong punches and kicks. In Round Four, Lane landed some powerful kicks to the body followed by more big punches. Lane trapped Marshal in the corner and began to tear him with a barrage of body and head shots dropping Marshall. Referee Jim Garguilo counted to ten before Marshall was able to get up. The winner, and still champion, by KO 1:59 of Round Four ...Tim “Bring The Pain" Lane. Now on to the Mixed Martial Arts Action. All bouts were scheduled for three 5 minute rounds. The night opened up with an explosive bout between DEREK JOHNSON and GREG KILLIAN for the Battle of the Cruiserweights. Johnson was relentless with his take downs. Killian was able to defend some with solid punches, but Johnson was able to take him to the mat several times. After some exchanges on the ground the fighters were stood back up by the

referee. The two exchanged punches. Killian connected with a big right hand sending Johnson to the mat. As Killian followed up, Johnson nearly fell out of the ring. The referee stopped the match and restarted the fighters in the middle of the ring. Johnson was able to regain his composure and weather the storm. In Round Two, Johnson was able to take Killian to the mat and throw some heavy punches from Killian’s half guard. Round Three was just as exciting. At the opening of the round, Johnson shot in for the double leg as Killian quickly tried for the guillotine choke. When they hit the ground, Killian switched to a Kimaura attempt, but Johnson walked right out of it. Killian was however able to roll Johnson and gain top control. Once on top, Killian landed some heavy body shots then attempted an arm bar. Johnson, in order to escape the arm bar, rolled out of the ring. The fighters were stood up once again. For the remainder of the round the two exchanging punches. Johnson scored another takedown. The fighters were brought to their feet several times. The fight went to the Judges' Scorecards and the decision went to the winner by split decision ...Greg Killian. The second bout of the night was The Battle Of the Women. LAURA d'AUGUSTE vs. TANYA VLAHAC. This fight was a real show of skill and heart from both women. At the opening of Round One, they met in the center of the ring and traded punches. After a brief

exchange, Laura started landing solid shots straight down the middle, as Tanya tried to cover up. After weathering that storm, Tanya began firing back and found herself once again trading blows with Laura. By the end of Round One, Tanya’s face was beat red and her eye was swollen, but that didn’t slow her down. Round Two resembled Round One. Laura was clearly controlling the fight landing just about everything she threw. Tanya attempted a few take downs but was unsuccessful. Round Three was another exciting round. The two exchanged punches and kicks once again, but it was Laura that would walk away victorious. The winner by doctor stoppage at 1:58 of Round Three ...Laura d'Auguste.

Next up was the Battle of the Heavyweights. TOM MULLER vs JOHN ROTONDELLA. This bout opened with an awesome display of skill by Muller. He opened the round with a beautiful high round kick, followed by a solid leg kick and a double leg take down. Rotondella gained half guard, but Muller was able to pass and get side mount then full mount where he rained down punches. Rotondella tried to escape but Muller was able to take his back and lock in a rear naked choke. The winner by submission (rear naked choke) at 3:37 of Round One ...Tom Muller. The next bout was a Superfight featuring JOSE RODRIGUEZ vs EDSON CARVALHO. As no surprise, Rodriguez came out throwing heavy leather. Seconds into Round One,

Rodriguez connected with a solid right buckling the legs of Carvalho. Rodriguez then threw Carvalho to the ground and began throwing heavy punches. As Carvalho regrouped, Rodriguez brought the fight back to their feet. After a brief exchange, Carvalho scored a single leg takedown. Carvalho gained top control and applied a compression choke, smothering Rodriguez with his chest. The winner by Submission (compression choke) at 1:31 of Round One ...Edson Carvalho. The Rematch between LUKE CUMMO and DAVID TIRELLI. These two met at the last "RING OF COMBAT" where the match was stopped by the doctor for a cut on the nose of Tirelli. In Round One, the fighters traded punches and take downs. Cummo attempted some submissions but Tirelli was able to easily defend. In Round Two, after another brief exchange,

Tirelli pulled guard and attempted a guillotine choke. Cummo pops his head out and the two stand back up. Tirelli throws a knee. Cummo catches it and takes Tirelli down. Cummo lands some big punches from the guard of Tirelli before passing to side mount. Tirelli tries to defend and Cummo takes his back. Tirelli reverses it and ends up in Cummo’s guard throwing punches of his own. Early In Round Three, Tirelli lands some big punches on what seemed to be an exhausted Cummo. Shortly after that Cummo connects with some solid punches of his own rocking Tirelli . This bout went to the Judges' Scorecards and the decision went to the winner by unanimous decision ...David Tirelli. "RING OF COMBAT" Super Light Heavyweight Championship. PETER “Drago” SELL  vs. CHRIS LIGUORI. In Round One, both fighters quickly went to the ground with Sell in the guard of  Liguori. They traded punches on the ground with Sell getting the better of

the exchange. Sell worked on passing Liguori’s guard while dropping bombs. Liguori answered back with solid strikes from the bottom. In Round Two, Sell gets a takedown and regains top control. Liguori avoids a Kimaura attempted by Sell and is able to get to his feet, but Sell shoots and takes him to the mat with a double leg. Liguori reverses and takes top control landing some big punches of his own. Sell was able to get off of his back and tried to double leg Liguori. Liguori was able to sprawl, hold control and land a few more punches until the end of the round. Round Three was the best round. There was non stop action. Liguori lands a couple of punches before Sell double legs him and gains side control and connects with some solid punches. Sell made a few submission attempts. Liguori escapes them and lands more punches. Liguori stands but Sell quickly takes him back down. They get back up, clinch and fall back to the mat and Liguori gets side control and drops big punches. They stand back up and as Sell goes for another take-down, the bell rings putting an end to this awesome fight. The winner, and champion, by split decision ...Peter “Drago” Sell. "RING OF COMBAT" Cruiserweight Championship. Champion JAMES GABERT  vs. EDDY ROLON. Round One saw the fighters quickly hitting the mat with Gabert in Rolon’s guard. They were both active with Gabert maintaining top control while Rolon was trying to lock Gabert's leg with his own legs. Eventually they stalemated and the referee stood

them back up. Rolon under hooks Gabert's arm and tries to roll him, but Gabert is able to base out and regain top control. In Round Two, Rolon throws a leg kick, Gabert catches it and slams Rolon to the mat. Gabert again takes side mount and throws punches. After Rolon neutralized Gabert's punches, the referee again brings the fighters back to their feet. Gabert landed some strong leg kicks before clinching and going back to the mat with Rolon in Gabert's guard. Rolon then stands out of Gabert's guard and does a front flip to pass guard (this move looked like it came right out of the books of Sakuraba)! Gabert was able to

regain top control just before the round ended. In Round Three, the fighters clenched and exchanged knees. Gabert scores another takedown and gets top control once again. Rolon reaches back for an ankle lock but Gabert escapes, takes top control and lands some punches. Rolon again neutralized the punches of Gabert and the referee stands them back up. Rolon tries to pull guard but Gabert gets full mount and starts throwing down punches. Rolon escapes looking for a heel hook. Gabert tries for the same but loses it and lands some good body shots. Seconds later, the round ends. The winner, and still Champion by unanimous decision ...James Gabert. Main Event Super Fight. NICKY “The Mad Monkey” SERRA vs RICK McCOY. The fight opened with a brief exchange. The fighters quickly clinch landing some good body shots.

Serra showed why he’s called “The Mad Monkey” by jumping into a flying triangle taking McCoy to the mat. Once on the ground, Serra tightened the triangle and threw a barrage of heavy punches to the head of McCoy while occasionally looking over to his corner smiling. McCoy tried to escape but the triangle was too tight and he eventually tapped out. The winner by submission (triangle choke) at 2:58 of Round One ...Nicky Serra. All bouts were USKBA ACTION SPORTS Sanctioned under the auspices of the New Jersey State Athletic Control Board, Larry Hazzard, Commissioner, Sylvester Cuyler, Chief Inspector. The referees were Dan Miragliotta, Kevin Mulhull and Jim Garguilo. The judges were Kuhn Fred Fitzgerald, Shihan Fred Corritone and Master Frank Borosso. Participating studios included; Panza Kickboxing, Hollobaugh's Kickboxing, Team Tiger Schulmann, Serra-Longo Competition Team, Team End Game, Pitt's Pen, Tri-State Brazilian Jiu Jitsu Team, Team Renzo Gracie, Total Fitness and Team Prodigy. For information on future "RING OF COMBAT" events, contact USKBA ACTION SPORTS Promoter World Champion Louis Neglia at 718-372-9089.