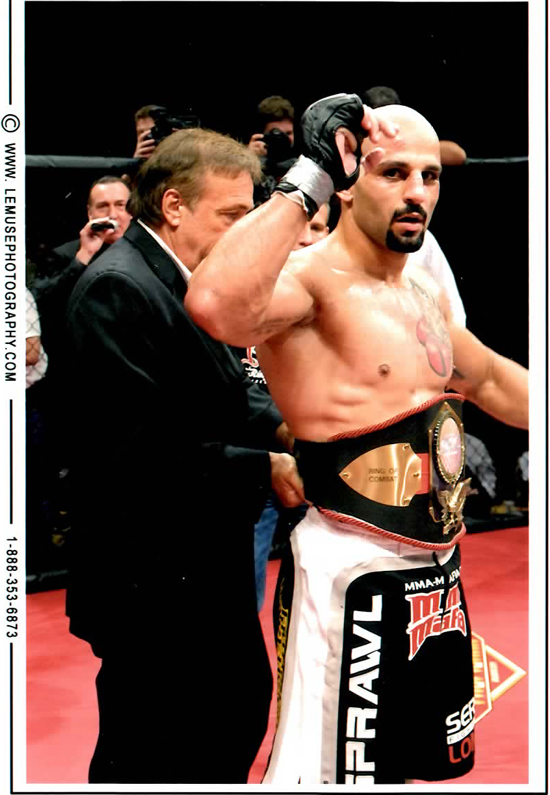 Lou Neglia's Ring of Combat is one of the longest running and most successful MMA promotions in the country.  More than 80 ROC fighters have moved on to the UFC and other top promotions, including former UFC champions Frankie Edgar and Matt Serra.  Recently, two more former ROC fighters have been making headlines in the UFC.  UFC title contenders Chris Weidman and Costa Philippou, both of whom fought solely at the Ring of Combat before signing with the UFC, are both on five fight win streaks in the Ultimate Fighting Championship.

Philippou, who fought nine times at the Ring of Combat before getting the call from the UFC, recently destroyed highly ranked Tim Boetsch at UFC 155.  Costa's dominance over Boetsch was a surprise to many fans, but not to Lou Neglia.  Lou, a former world champion kick boxer, does his own matchmaking at the Ring of Combat, and he saw Costa's potential early on.  Lou's tough matchmaking has benefitted Costa, who has shown himself to be well prepared for the UFC.

There are no easy fights at the ROC, which is one reason why so many ROC fighters move on to the "big show."  If you have what it takes to succeed at the Ring of Combat, you are prepared for the UFC.  And there is also the name recognition that fighters develop when fighting at the ROC.  Lou puts on four or five shows a year, and ROC fighters get known by fight fans before they hit the big time.  The UFC and other big promotions know well of the ROC's reputation, and it's clear that they look to the ROC for new talent.

As a former champion, Lou Neglia knows what it takes to succeed in combat sports.  And he looks for those types of championship qualities in his own fighters.  At the ROC, a fighter's won-lost record doesn't mean as much as his heart and passion for the sport.  If a fighter shows talent and determination and loses at a ROC event, he is not in danger of being cut.  The big shows would rather take a 7-3 fighter from the ROC than a 10-0 fighter from another organization, because they know that whoever fights at the ROC will have been in with very challenging opponents.  Records can be deceiving, ands some promoters try to pad certain fighters' records by giving them easy fights and putting them in mismatches.

That does not happen at the Ring of Combat.  Only genuine fighters fight there–not guys who want to impress people by saying they're fighters.  If you're a "pretty boy" fighter who wants easy victories, the ROC is not for you.  And the UFC knows that.

The latest Ring of Combat, number 43, is coming up on January 25, 2013, and as always, it will feature world-class MMA talent.  At the top of the card is undefeated Ryan LaFlare.  Ryan has fought six times at the ROC, finishing all his opponents, four of them in the first round.

Also on the card is Deividas Taurosevicius, a fierce competitor who has fought for promotions such as Bellator and the WEC, and who is coming off an exciting come from behind arm bar submission at Ring of Combat 42 back in September.  Deividas displayed great courage and determination in that fight and he lived up to Lou's credo that "It's not how hard you get hit, it's how fast you get up."

Deividas and Ryan are the kind of fighters that Lou likes.  Lou is a promoter and matchmaker, but he's also a fan.  And he makes the kinds of fights that fans want to see.  "Tough fights make great fighters," Lou says, and the proof is in the ROC and in UFC.

Like American Idol, the Ring of Combat develops talent and showcases rising stars before they get to the big time.  Talented fighters get to showcase their skills to a wider audience, including the UFC's and other big shows' talent scouts, while developing their skills against top opposition.  And like American Idol, stars are born in the Ring of Combat cage.  Some even go on to be UFC champions.  Will Weidman and Costa be next?  It's a good bet that one of both of these fighters will reach the highest levels in the UFC.

Who will be the next MMA superstar?  Find out on January 25 in Atlantic City, New Jersey, at Ring of Combat 43.