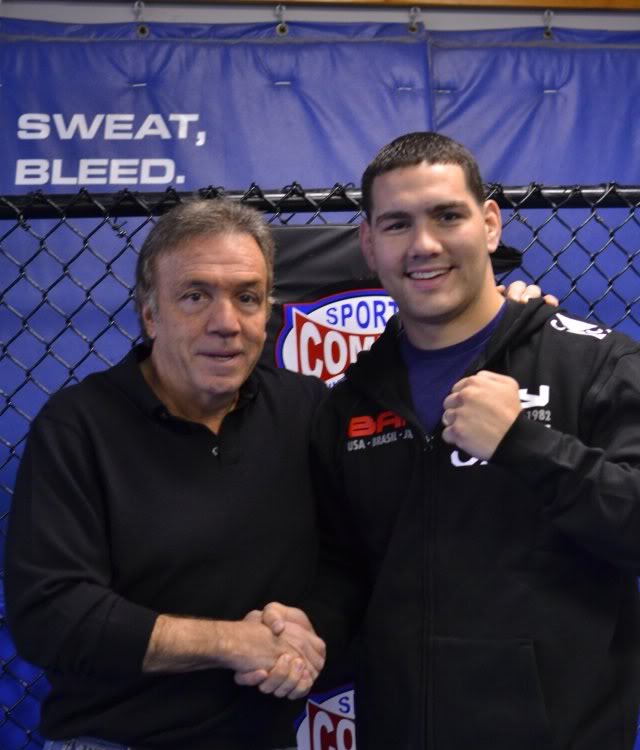 Lou Neglia: Proud of His Ring of Combat Alumni

Lou Neglia is a former world kickboxing champion, and president of Ring of Combat, one of the longest running MMA promotions outside of the UFC.   Of course, Lou takes great pride in his world championship, but he takes just as much pride in turning young fighters into UFC veterans and champions.  Eighty mixed martial artists who got their start at the Ring of Combat have moved onto the UFC and had highly successful careers, a feat that is perhaps unmatched in MMA history.

Three examples out of the eighty fighters who have moved on to the UFC are Matt Serra, Costa Philippou and Chris Weidman.  These three warriors all fought for Lou Neglia exclusively before moving up to the UFC.  Matt Serra, who used to fight at Lou's Vengeance at the Vanderbilt show, went on to become a UFC champion.  Costa Philippou is currently riding a four fight win streak in the UFC, and quickly moving up the ranks.   And Chris Weidman is getting off to an amazing start with the UFC.  Undefeated in his MMA career, he is 4-0 at the ROC and 5-0 in the UFC, and is coming off a dominating win over highly ranked Mark Munoz.  Neglia feels that the sky is the limit for Weidman, and expects Chris to win the UFC middleweight championship in the near future.

"Weidman has the mental toughness to be a champion," Lou says.  "He has confidence in himself and never worries about the other guy.  When he gets hit, he grits his teeth and fires back.  Other guys fold, but not Chris Weidman.  He has all the tools.  He's championship quality."

Lou then goes on to address  Anderson Silva, the legendary UFC middleweight champion:  "Chris Weidman is coming for you, and he will take you down and that will be his avenue to his victory."

Yet another fighter who fought exclusively for Lou before moving up into a Zuffa-owned promotion is Strikeforce star Gian Villante.  Villante is on a three fight win streak at Strikeforce, and Lou expects big things from him.  These are just four examples out of a total of eighty who have gone on to big things in their MMA careers.

As you can see, Lou is very proud of his fighters, and proud of the way that the Ring of Combat has prepared them for the UFC.   For its part, the UFC is well aware of the quality of competition that the ROC offers, which is why so many ROC fighters now fight there.  In this business, it's who you fight and how you fight rather than just your record that gets you into the big leagues.  There are examples of the UFC declining 10-0 fighters who have fought in other organizations in favor of signing 7-3 fighters who have proven themselves in the ROC cage.  Lou Neglia's philosophy is competitive fights make great fighters, not just when you get to the UFC, but at every step of the way.  For fighters looking to pad their records, participate in mismatches or get easy fights, Lou will be the first to say that the Ring of Combat is definitely not the place to go.  And his long list of successful alumni shows the wisdom of this way of thinking.

Another important part of the Ring of Combat's success–it sells out every show–is that Neglia doesn't try to compete with the UFC.  He's more than happy with finding and developing talented fighters to the point where they can compete and succeed in the big show.

Several MMA promoters have approached Lou about merging their promotions in order to compete with the UFC.  Lou always declines the offers.   He sees through these offers, and knows that many promoters are driven by greed and jealousy of the UFC–which is why they wind up folding while the ROC continues to thrive.

Lou Neglia will continue to put on great shows and develop the MMA stars of tomorrow.  It's his niche and something he loves doing.  He always feels a special joy when ripping up a contract with a fighter because that fighter got a call from the UFC.  As a former fighter and world champion himself, Neglia knows that the ultimate goal of any fighter is to achieve a world title.  He's proud that his Ring of Combat is the ultimate stepping-stone to the Ultimate Fighting Championship, and will be for years to come.