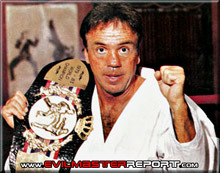 If you view the Northeast as a microcosm of the MMA world, then Ring of Combat and promoter Lou Neglia are akin to the UFC and Dana White. You simply cannot be a homegrown aspiring pro fighter around these parts without harboring designs on making your mark in ROC (or the Cage Fury Fighting Championship, but that's for another post), and given that dozens and dozens of UFC veterans can credit ROC as the stepping stone that helped them reach the Octagon, well, that makes Neglia the man who laid those stones down to create that path.

It's not hard to find old pics of Neglia from his championship-kickboxer days, but most of us know him as a promoter. Ring of Combat, which began in 2002 and is now up to its thirty-eighth pro installment, is perhaps his greatest achievement in the realm of MMA; however, there are amateur MMA events in there, too, plus a long-running NYC-based kickboxing show called Combat at the Capitale and a seemingly endless number of one-off events (Battle on Broadway featured kickboxing and MMA bouts in a hotel ballroom in Times Square almost a decade ago, while there was a recent kickboxing extravaganza out in Brighton Beach). Before that, there were fourteen Vengeance at the Vanderbilt installments on Long Island, which saw the likes of Matt Serra and Pete Sell getting their MMA on… heck, the first sanctioned MMA bout in New Jersey took place on one of Neglia's show in Atlantic City. "Longevity" may be an abstract concept to some promoters, but to Neglia, that word is like a genetic sequence coded into his DNA.

It takes a very shrewd business men to survive for any length of time in this sport, but Neglia has managed to temper that necessary shrewdness with traits like kindness, compassion and a genuine friendliness. If you're a reporter, he'll accomodate you; if you're a promising young upstart, he'll make sure you're tested (remember: padded records don't get you into the UFC, hard fights do); and if you're a grizzled veteran, he'll find a spot for you on the next card.

There's a few reasons why ROC has thrived for so long. But without question, the biggest one is Neglia.